Other than the initial announcement on Facebook I haven't written about the passing of my friend, CJ Henderson. He lost his battle with cancer on the 4th of July. If it had to be, then no better day than that to be liberated from his pain.

I have been sad and I have cried, no more so than on that day as I realized I missed my chance to see him one more time. I was supposed to go visit the very next day. I was making him soup at his special request. I made the soup anyway, but I didn't get to see my friend.

Why am I writing this now? So long after his passing?

Today I received this: 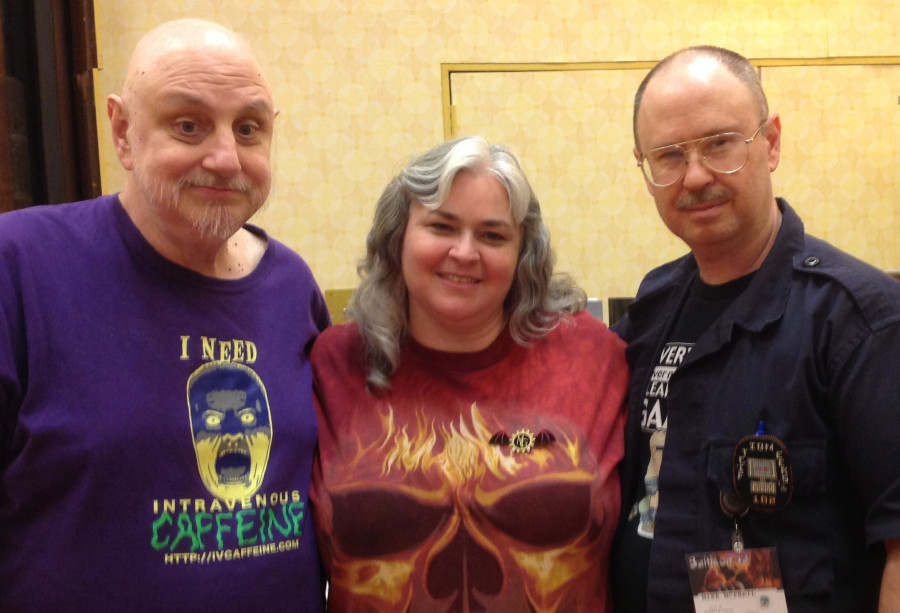 His wife, Tin, sent me this picture from Balticon...the last time I ever saw him.

When someone passes you think that's it...they'll never touch my life again. There is a hole where they used to be.

No. CJ gave me his family and he gave me tasks to carry me through this difficult time. He gave me memories and motivation. He sparked enthusiasm. Even now he's pushing me to write great works. Opening the doors to opportunity. Inviting me into his world, even as he's had to step away from it.

I ache each time I think of him not there. I tear up when I come across an email from him still in my in box or open a folder to discover a photograph I wasn't expecting. I will always miss his voice, his hugs, his grand plans, even now still playing out.

See, the last time I saw CJ I surprised him with a party celebrating his 30th anniversary. I didn't realize it was a dress rehearsal.

His final request of me...to throw a party celebrating his life. It will be one heck of a party, larger than life, like CJ himself.

I hope you all can join us. It's called CJ-Con and it's being held in the absolute heart of his world...his home, among his family and all the memories he built up over his life. Here are the details: